Configure a Switch with Initial Settings

Configure a Switch with Initial Settings

Before you can configure a switch, you need to turn it on and allow it to go through the five-step boot sequence. This topic covers the basics of configuring a switch and includes a lab at the end.

After a Cisco switch is powered on, it goes through the following five-step boot sequence:

Step 1: First, the switch loads a power-on self-test (POST) program stored in ROM. POST checks the CPU subsystem. It tests the CPU, DRAM, and the portion of the flash device that makes up the flash file system.
Step 2: Next, the switch loads the boot loader software. The boot loader is a small program stored in ROM that is run immediately after POST successfully completes.
Step 3: The boot loader performs low-level CPU initialization. It initializes the CPU registers, which control where physical memory is mapped, the quantity of memory, and its speed.
Step 4: The boot loader initializes the flash file system on the system board.
Step 5: Finally, the boot loader locates and loads a default IOS operating system software image into memory and gives control of the switch over to the IOS.

In the example, the BOOT environment variable is set using the boot system global configuration mode command. Notice that the IOS is located in a distinct folder and the folder path is specified. Use the command show boot to see what the current IOS boot file is set to.

The table defines each part of the boot system command.

Cisco Catalyst switches have several status LED indicator lights. You can use the switch LEDs to quickly monitor switch activity and performance. Switches of different models and feature sets will have different LEDs and their placement on the front panel of the switch may also vary.

The figure shows the switch LEDs and the Mode button for a Cisco Catalyst 2960 switch. 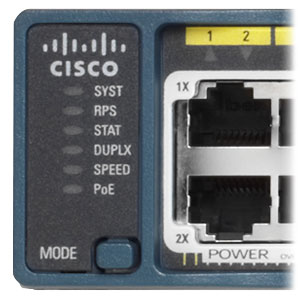 The Mode button (7 in the figure) is used to toggle through port status, port duplex, port speed, and if supported, the Power over Ethernet (PoE) status of the port LEDs (8 in the figure).

Recovering from a System Crash

The boot loader can be accessed through a console connection following these steps:

Type the help or ? at the boot loader prompt to view a list of available commands.

After flash has finished initializing you can enter the dir flash: command to view the directories and files in flash, as shown in the output.

To prepare a switch for remote management access, the switch must have a switch virtual interface (SVI) configured with an IPv4 address and subnet mask or an IPv6 address and a prefix length for IPv6. The SVI is a virtual interface, not a physical port on the switch. Keep in mind that to manage the switch from a remote network, the switch must be configured with a default gateway. This is very similar to configuring the IP address information on host devices.

By default, the switch is configured to have its management controlled through VLAN 1. All ports are assigned to VLAN 1 by default. For security purposes, it is considered a best practice to use a VLAN other than VLAN 1 for the management VLAN, such as VLAN 99 in the example.

Note: The SVI for VLAN 99 will not appear as “up/up” until VLAN 99 is created and there is a device connected to a switch port associated with VLAN 99.

Note: The switch may need to be configured for IPv6. For example, before you can configure IPv6 addressing on a Cisco Catalyst 2960 running IOS version 15.0, you will need to enter the global configuration command sdm prefer dual-ipv4-and-ipv6 default and then reload the switch.

The switch should be configured with a default gateway if it will be managed remotely from networks that are not directly connected.

Note: Because, it will receive its default gateway information from a router advertisement (RA) message, the switch does not require an IPv6 default gateway.

The show ip interface brief and show ipv6 interface brief commands are useful for determining the status of both physical and virtual interfaces. The output shown confirms that interface VLAN 99 has been configured with an IPv4 and IPv6 address.

Note: An IP address applied to the SVI is only for remote management access to the switch; this does not allow the switch to route Layer 3 packets.