Networks use copper media because it is inexpensive, easy to install, and has low resistance to electrical current. However, copper media is limited by distance and signal interference.

Data is transmitted on copper cables as electrical pulses. A detector in the network interface of a destination device must receive a signal that can be successfully decoded to match the signal sent. However, the farther the signal travels, the more it deteriorates. This is referred to as signal attenuation. For this reason, all copper media must follow strict distance limitations as specified by the guiding standards.

The timing and voltage values of the electrical pulses are also susceptible to interference from two sources:

The figure shows how data transmission can be affected by interference.

To counter the negative effects of EMI and RFI, some types of copper cables are wrapped in metallic shielding and require proper grounding connections.

To counter the negative effects of crosstalk, some types of copper cables have opposing circuit wire pairs twisted together, which effectively cancels the crosstalk.

The susceptibility of copper cables to electronic noise can also be limited using these recommendations:

There are three main types of copper media used in networking.

The figure is composed of pictures showing the three types of copper cabling, each with a portion of the outer cable jacket stripped to expose the cable construction. The first picture shows unshielded twisted-pair (UTP) cable with four color pairs of twisted wires – blue, orange, green, and brown. The second picture is shielded twisted-pair (STP) cable showing four pairs of twisted wires – blue, green, brown, and orange – with a foil shield surrounding all four pairs. The last picture shows a center copper conductor surrounded by plastic insulation surrounded by a braided shield. 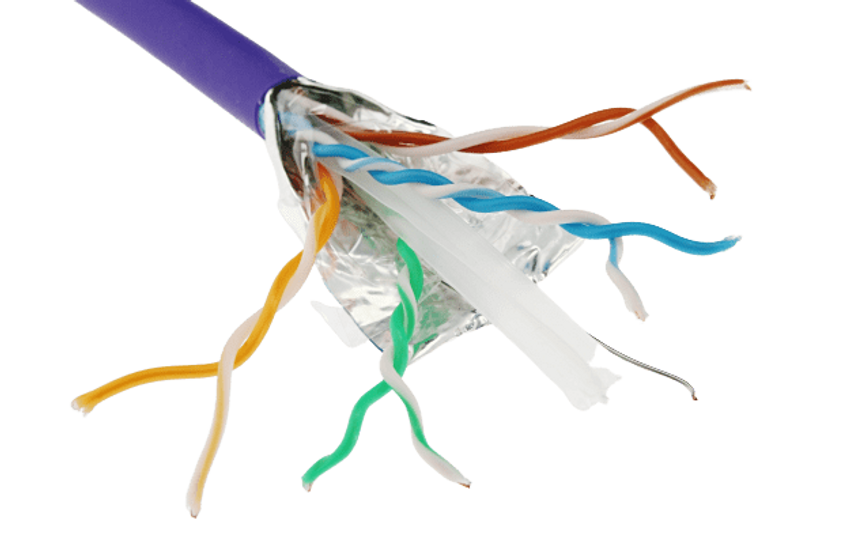 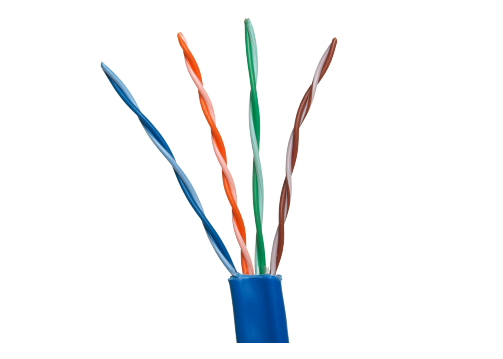 Unshielded twisted-pair (UTP) cabling is the most common networking media. UTP cabling, terminated with RJ-45 connectors, is used for interconnecting network hosts with intermediary networking devices, such as switches and routers.

In LANs, UTP cable consists of four pairs of color-coded wires that have been twisted together and then encased in a flexible plastic sheath that protects from minor physical damage. The twisting of wires helps protect against signal interference from other wires.

As seen in the figure, the color codes identify the individual pairs and wires and aid in cable termination. 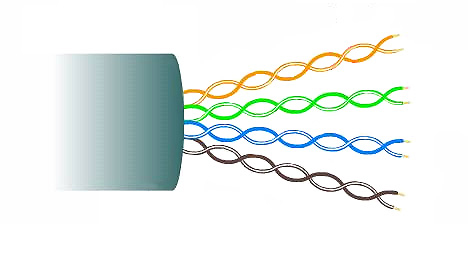 The numbers in the figure identify some key characteristics of unshielded twisted pair cable:

STP cables combine the techniques of shielding to counter EMI and RFI, and wire twisting to counter crosstalk. To gain the full benefit of the shielding, STP cables are terminated with special shielded STP data connectors. If the cable is improperly grounded, the shield may act as an antenna and pick up unwanted signals.

The STP cable shown uses four pairs of wires, each wrapped in a foil shield, which are then wrapped in an overall metallic braid or foil.

The numbers in the figure identify some key features of shielded twisted pair cable:

Coaxial cable, or coax for short, gets its name from the fact that there are two conductors that share the same axis. As shown in the figure, coaxial cable consists of the following:

There are different types of connectors used with coax cable. The Bayonet Neill–Concelman (BNC), N type, and F type connectors are shown in the figure.

Although UTP cable has essentially replaced coaxial cable in modern Ethernet installations, the coaxial cable design is used in the following situations:

The numbers in the figure identify some key features of coaxial cable: