Static GUA Configuration on a Router

As you learned in the previous topic, IPv6 GUAs are the same as public IPv4 addresses. They are globally unique and routable on the IPv6 internet. An IPv6 LLA lets two IPv6-enabled devices communicate with each other on the same link (subnet). It is easy to statically configure IPv6 GUAs and LLAs on routers to help you create an IPv6 network. This topic teaches you how to do just that!

Most IPv6 configuration and verification commands in the Cisco IOS are similar to their IPv4 counterparts. In many cases, the only difference is the use of ipv6 in place of ip within the commands.

Notice that there is no space between ipv6-address and prefix-length.

The example configuration uses the topology shown in the figure and these IPv6 subnets:

Manually configuring the IPv6 address on a host is similar to configuring an IPv4 address.

The graphic shows the Windows Internet Protocol Version 6 (TCP/IPv6) Prosperities window. The Use the following IPv6 address button is selected. The IPv6 address is 2001:db8:acad:1::1. The Subnet prefix length is 64. The Default gateway is 2001:db8:acad:1::1. The Use the following DNS server address button is selected. 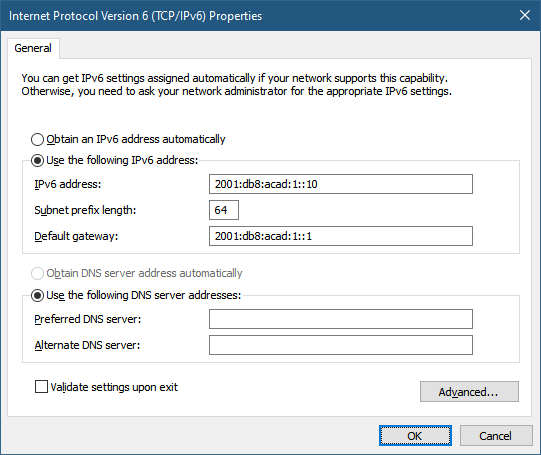 Just as with IPv4, configuring static addresses on clients does not scale to larger environments. For this reason, most network administrators in an IPv6 network will enable dynamic assignment of IPv6 addresses.

There are two ways in which a device can obtain an IPv6 GUA automatically:

SLAAC and DHCPv6 are covered in the next topic.

Note: When DHCPv6 or SLAAC is used, the LLA of the router will automatically be specified as the default gateway address.

Configuring the LLA manually lets you create an address that is recognizable and easier to remember. Typically, it is only necessary to create recognizable LLAs on routers. This is beneficial because router LLAs are used as default gateway addresses and in routing advertisement messages.

LLAs can be configured manually using the ipv6 address ipv6-link-local-address link-local command. When an address begins with this hextet within the range of fe80 to febf, the link-local parameter must follow the address.

The figure shows an example topology with LLAs on each interface.

The example shows the configuration of an LLA on router R1.

Statically configured LLAs are used to make them more easily recognizable as belonging to router R1. In this example, all the interfaces of router R1 have been configured with an LLA that begins with fe80::n:1.