IP Configuration on a Windows Host

If you have used any of the tools in the previous topic to verify connectivity and found that some part of your network is not working as it should, now is the time to use some commands to troubleshoot your devices. Host and IOS commands can help you determine if the problem is with the IP addressing of your devices, which is a common network problem.

Checking the IP addressing on host devices is a common practice in networking for verifying and troubleshooting end-to-end connectivity. In Windows 10, you can access the IP address details from the Network and Sharing Center, as shown in the figure, to quickly view the four important settings: address, mask, router, and DNS. 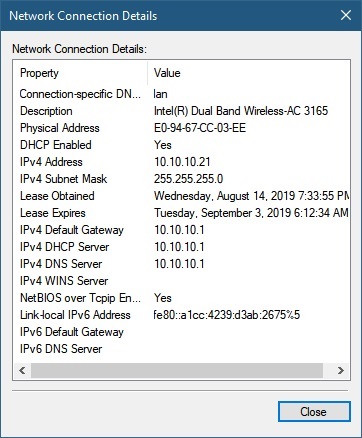 However, network administrators typically view the IP addressing information on a Windows host by issuing the ipconfig command at the command line of a Windows computer, as shown in the sample output.

Use the ipconfig /all command to view the MAC address, as well as a number of details regarding the Layer 3 addressing of the device, as shown in the example output.

If a host is configured as a DHCP client, the IP address configuration can be renewed using the ipconfig /release and ipconfig /renew commands, as shown in the sample output.

The DNS Client service on Windows PCs also optimizes the performance of DNS name resolution by storing previously resolved names in memory. The ipconfig /displaydns command displays all of the cached DNS entries on a Windows computer system, as shown in the example output.

IP Configuration on a Linux Host

Verifying IP settings using the GUI on a Linux machine will differ depending on the Linux distribution (distro) and desktop interface. The figure shows the Connection Information dialog box on the Ubuntu distro running the Gnome desktop. 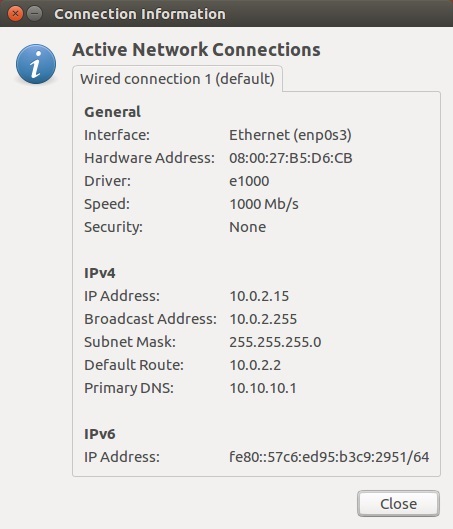 On the command line, network administrators use the ifconfig command to display the status of the currently active interfaces and their IP configuration, as shown in the output.

The Linux ip address command is used to display addresses and their properties. It can also be used to add or delete IP addresses.

Note: The output displayed may vary depending on the Linux distribution.

IP Configuration on a macOS Host

In the GUI of a Mac host, open Network Preferences > Advanced to get the IP addressing information, as shown in the figure. 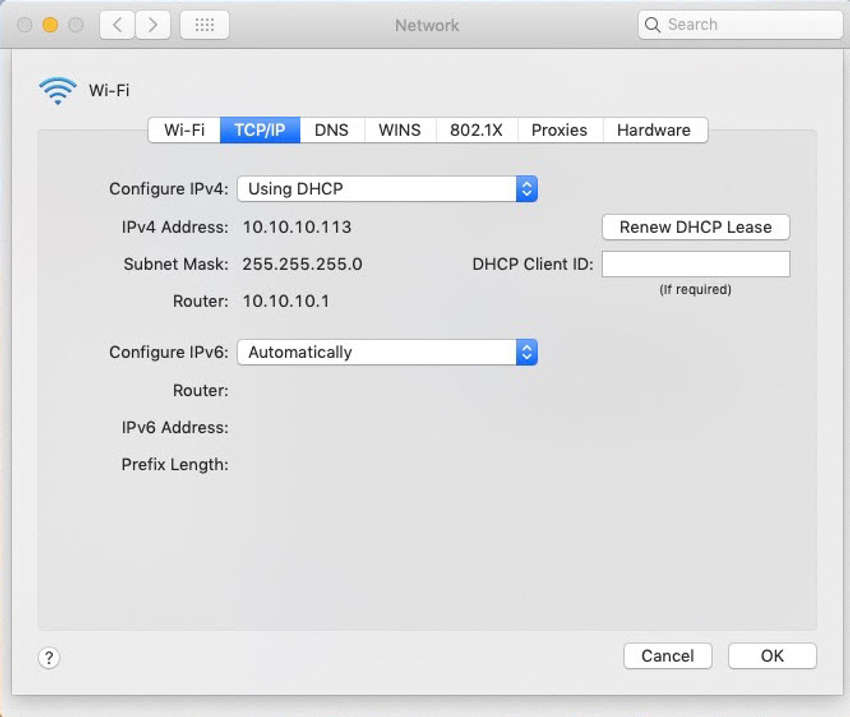 However, the ifconfig command can also be used to verify the interface IP configuration a shown in the output.

Other useful macOS commands to verify the host IP settings include networksetup -listallnetworkservices and the networksetup -getinfo <network service>, as shown in the following output.

The arp command is executed from the Windows, Linux, or Mac command prompt. The command lists all devices currently in the ARP cache of the host, which includes the IPv4 address, physical address, and the type of addressing (static/dynamic), for each device.

For instance, refer to the topology in the figure.

The output of the arp -a command on the Windows PC-A host is displayed.

The arp -a command displays the known IP address and MAC address binding. Notice how IP address 10.0.0.5 is not included in the list. This is because the ARP cache only displays information from devices that have been recently accessed.

To ensure that the ARP cache is populated, ping a device so that it will have an entry in the ARP table. For instance, if PC-A pinged 10.0.0.5, then the ARP cache would contain an entry for that IP address.

The cache can be cleared by using the netsh interface ip delete arpcache command in the event the network administrator wants to repopulate the cache with updated information.

Note: You may need administrator access on the host to be able to use the netsh interface ip delete arpcache command.

Commonly used show commands and when to use them are listed in the table.

Verifies the current configuration and settings

Verifies the interface status and displays any error messages

Verifies the Layer 3 information of an interface

Verifies the list of known hosts on the local Ethernet LANs

Verifies which protocols are operational

Verifies the memory, interfaces, and licences of the device

There are several other IOS commands that are useful. The Cisco Discovery Protocol (CDP) is a Cisco proprietary protocol that runs at the data link layer. Because CDP operates at the data link layer, two or more Cisco network devices, such as routers that support different network layer protocols, can learn about each other even if Layer 3 connectivity has not been established.

CDP provides the following information about each CDP neighbor device:

Refer to the topology and the show cdp neighbor command output.

The show cdp neighbors detail command reveals the IP address of a neighboring device, as shown in the output. CDP will reveal the IP address of the neighbor regardless of whether or not you can ping that neighbor. This command is very helpful when two Cisco routers cannot route across their shared data link. The show cdp neighbors detail command will help determine if one of the CDP neighbors has an IP configuration error.

As helpful as CDP is, it can also be a security risk because it can provide useful network infrastructure information to threat actors. For example, by default many IOS versions send CDP advertisements out all enabled ports. However, best practices suggest that CDP should be enabled only on interfaces that are connecting to other infrastructure Cisco devices. CDP advertisements should be disabled on user-facing ports.

For example, the show ip interface brief output displays all interfaces on the router, the IP address assigned to each interface, if any, and the operational status of the interface.

The show ip interface brief command can also be used to verify the status of the switch interfaces, as shown in the output.

The output also shows that the FastEthernet0/1 interface is down. This indicates that either no device is connected to the interface or the device that is connected has a network interface that is not operational.

In contrast, the output shows that the FastEthernet0/2 and FastEthernet0/3 interfaces are operational. This is indicated by both the status and protocol being shown as up.