You might not always have direct access to your switch when you need to configure it. You need to be able to access it remotely and it is imperative that your access is secure. This topic discusses how to configure Secure Shell (SSH) for remote access. A Packet Tracer activity gives you the opportunity to try this yourself.

Telnet uses TCP port 23. It is an older protocol that uses unsecure plaintext transmission of both the login authentication (username and password) and the data transmitted between the communicating devices. A threat actor can monitor packets using Wireshark. For example, in the figure the threat actor captured the username admin and password ccna from a Telnet session.

Secure Shell (SSH) is a secure protocol that uses TCP port 22. It provides a secure (encrypted) management connection to a remote device. SSH should replace Telnet for management connections. SSH provides security for remote connections by providing strong encryption when a device is authenticated (username and password) and also for the transmitted data between the communicating devices.

For example, the figure shows a Wireshark capture of an SSH session. The threat actor can track the session using the IP address of the administrator device. However, unlike Telnet, with SSH the username and password are encrypted. 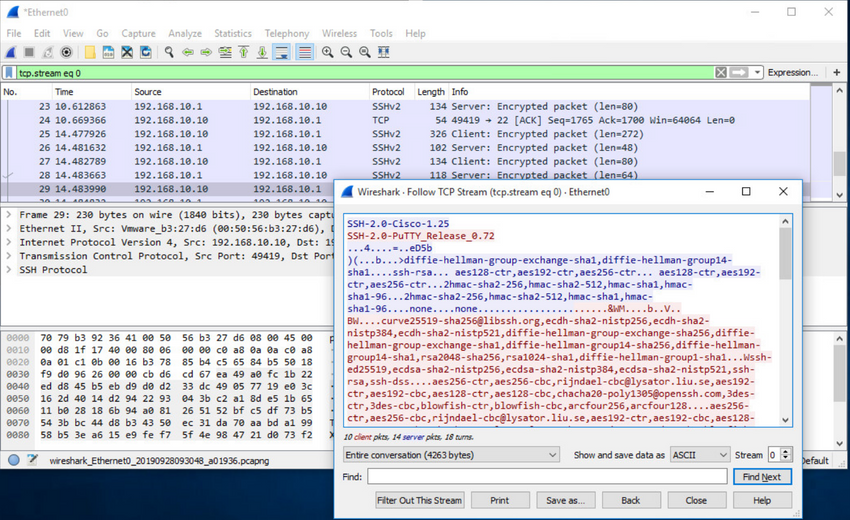 To enable SSH on a Catalyst 2960 switch, the switch must be using a version of the IOS software including cryptographic (encrypted) features and capabilities. Use the show version command on the switch to see which IOS the switch is currently running. An IOS filename that includes the combination “k9” supports cryptographic (encrypted) features and capabilities. The example shows the output of the show version command.

Before configuring SSH, the switch must be minimally configured with a unique hostname and the correct network connectivity settings.

Use the show ip ssh command to verify that the switch supports SSH. If the switch is not running an IOS that supports cryptographic features, this command is unrecognized.

Configure the IP domain name of the network using the ip domain-name domain-name global configuration mode command. In the figure, the domain-name value is cisco.com.

Not all versions of the IOS default to SSH version 2, and SSH version 1 has known security flaws. To configure SSH version 2, issue the ip ssh version 2 global configuration mode command. Generating an RSA key pair automatically enables SSH. Use the crypto key generate rsa global configuration mode command to enable the SSH server on the switch and generate an RSA key pair. When generating RSA keys, the administrator is prompted to enter a modulus length. The sample configuration in the figure uses a modulus size of 1,024 bits. A longer modulus length is more secure, but it takes longer to generate and to use.

Note: To delete the RSA key pair, use the crypto key zeroize rsa global configuration mode command. After the RSA key pair is deleted, the SSH server is automatically disabled.

By default, SSH supports both versions 1 and 2. When supporting both versions, this is shown in the show ip ssh output as supporting version 2. Enable SSH version using the ip ssh version 2 global configuration command.

On a PC, an SSH client such as PuTTY, is used to connect to an SSH server. For example, assume the following is configured:

The figure shows the PuTTY settings for PC1 to initiate an SSH connection to the SVI VLAN IPv4 address of S1. 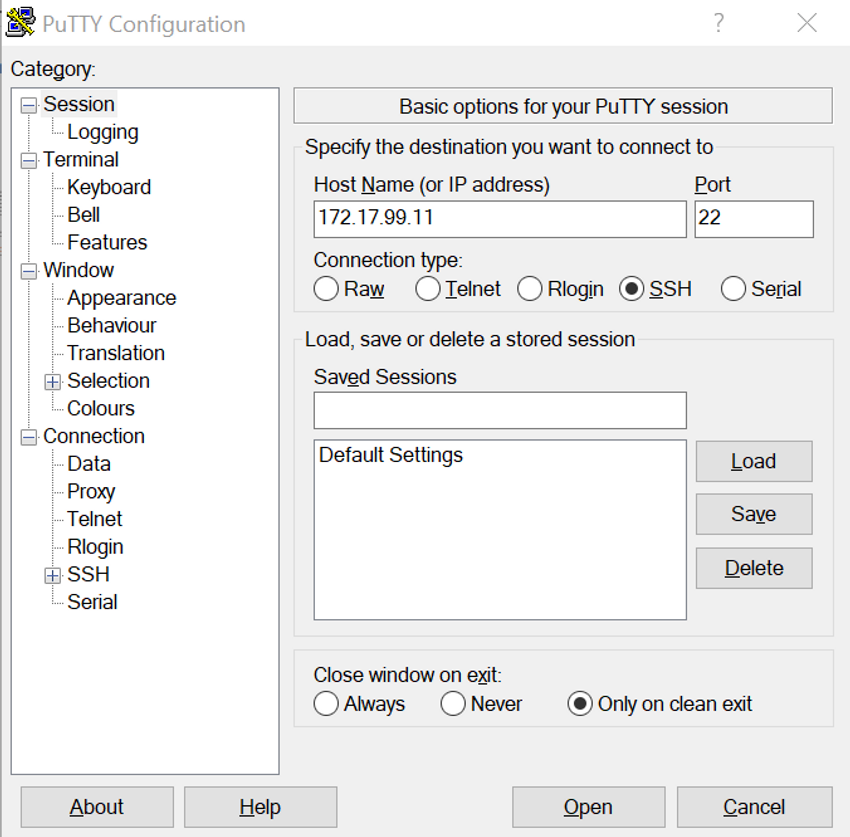 When connected, the user is prompted for a username and password as shown in the example. Using the configuration from the previous example, the username admin and password ccna are entered. After entering the correct combination, the user is connected via SSH to the command line interface (CLI) on the Catalyst 2960 switch.

To display the version and configuration data for SSH on the device that you configured as an SSH server, use the show ip ssh command. In the example, SSH version 2 is enabled.