In the previous topics, you learned about WLAN configuration. Here we will discuss troubleshooting WLAN issues.

Network problems can be simple or complex, and can result from a combination of hardware, software, and connectivity issues. Technicians must be able to analyze the problem and determine the cause of the error before they can resolve the network issue. This process is called troubleshooting.

Troubleshooting any sort of network problem should follow a systematic approach. A common and efficient troubleshooting methodology is based on the scientific method and can be broken into the six main steps shown in the table.

When troubleshooting a WLAN, a process of elimination is recommended.

In the figure, a wireless client is not connecting to the WLAN.

If there is no connectivity, check the following:

If the PC is operational but the wireless connection is performing poorly, check the following:

Next, ensure that all the devices are actually in place. Consider a possible physical security issue. Is there power to all devices and are they powered on?

Finally, inspect links between cabled devices looking for bad connectors or damaged or missing cables. If the physical plant is in place, verify the wired LAN by pinging devices, including the AP. If connectivity still fails at this point, perhaps something is wrong with the AP or its configuration.

When the user PC is eliminated as the source of the problem, and the physical status of devices is confirmed, begin investigating the performance of the AP. Check the power status of the AP.

Troubleshooting When the Network Is Slow

To optimize and increase the bandwidth of 802.11 dual-band routers and APs, either:

The figure depicts a home network splitting the traffic between 2.4GHz and 5GHz. The WLC is connected to a television, cell phone and tablet using 5GHz. It is also connected to two laptops using 2.4 GHz.

There are several reasons for using a split-the-traffic approach:

By default, dual-band routers and APs use the same network name on both the 2.4 GHz band and the 5 GHz band. The simplest way to segment traffic is to rename one of the wireless networks. With a separate, descriptive name, it is easier to connect to the right network.

To improve the range of a wireless network, ensure the wireless router or AP location is free of obstructions, such as furniture, fixtures, and tall appliances. These block the signal, which shortens the range of the WLAN. If this still does not solve the problem, then a Wi-Fi Range Extender or deploying the Powerline wireless technology may be used.

Most wireless routers and APs offer upgradable firmware. Firmware releases may contain fixes for common problems reported by customers as well as security vulnerabilities. You should periodically check the router or AP for updated firmware. In the figure, the network administrator is verifying that the firmware is up to date on a Cisco Meraki AP. 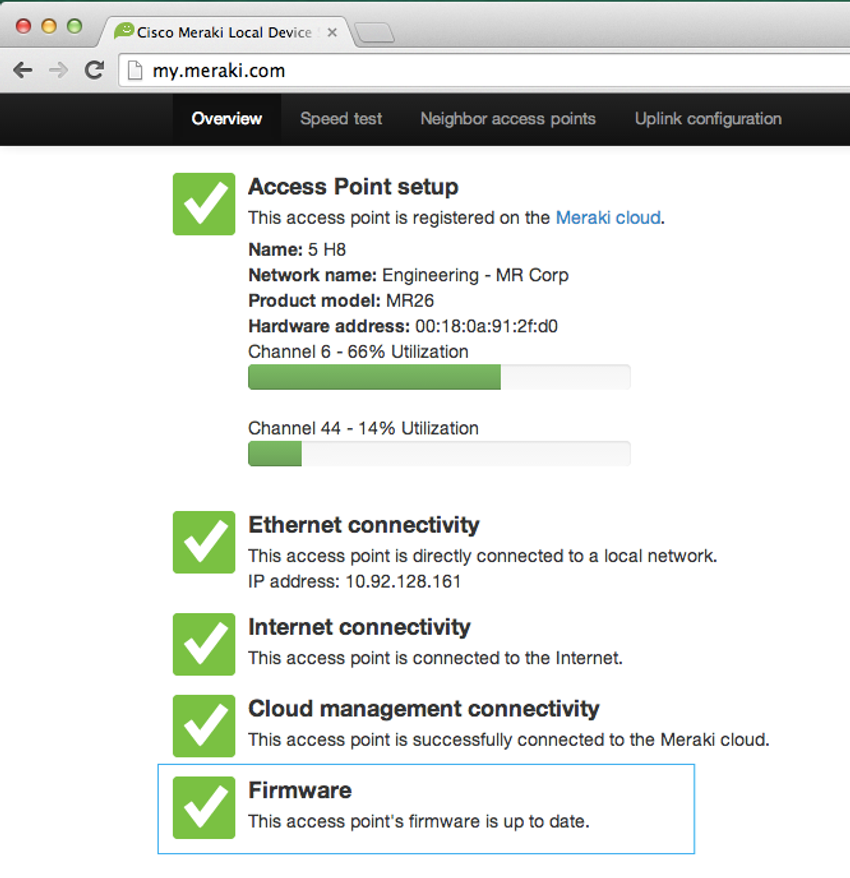 On a WLC, there will most likely be the ability to upgrade the firmware on all APs that the WLC controls. In the next figure, the network administrator is downloading the firmware image that will be used to upgrade all the APs.

On a Cisco 3504 Wireless Controller, Click the WIRELESS tab > Access Points from the left menu > Global Configuration submenu. Then scroll to the bottom of the page for the AP Image Pre-download section.

Users will be disconnected from the WLAN and the internet until the upgrade finishes. The wireless router may need to reboot several times before normal network operations are restored.