In the previous topic, you learned a bit about unshielded twisted-pair (UTP) copper cabling. Because UTP cabling is the standard for use in LANs, this topic goes into detail about its advantages and limitations, and what can be done to avoid problems.

When used as a networking medium, UTP cabling consists of four pairs of color-coded copper wires that have been twisted together and then encased in a flexible plastic sheath. Its small size can be advantageous during installation.

UTP cable does not use shielding to counter the effects of EMI and RFI. Instead, cable designers have discovered other ways that they can limit the negative effect of crosstalk:

UTP cable relies solely on the cancellation effect produced by the twisted wire pairs to limit signal degradation and effectively provide self-shielding for wire pairs within the network media. 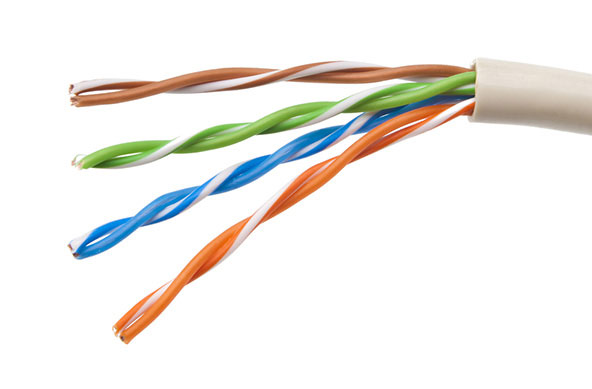 UTP cabling conforms to the standards established jointly by the TIA/EIA. Specifically, TIA/EIA-568 stipulates the commercial cabling standards for LAN installations and is the standard most commonly used in LAN cabling environments. Some of the elements defined are as follows:

The electrical characteristics of copper cabling are defined by the Institute of Electrical and Electronics Engineers (IEEE). IEEE rates UTP cabling according to its performance. Cables are placed into categories based on their ability to carry higher bandwidth rates. For example, Category 5 cable is used commonly in 100BASE-TX Fast Ethernet installations. Other categories include Enhanced Category 5 cable, Category 6, and Category 6a.

Cables in higher categories are designed and constructed to support higher data rates. As new gigabit speed Ethernet technologies are being developed and adopted, Category 5e is now the minimally acceptable cable type, with Category 6 being the recommended type for new building installations.

Some manufacturers are making cables exceeding the TIA/EIA Category 6a specifications and refer to these as Category 7.

As shown in the figure, the RJ-45 connector is the male component, crimped at the end of the cable. 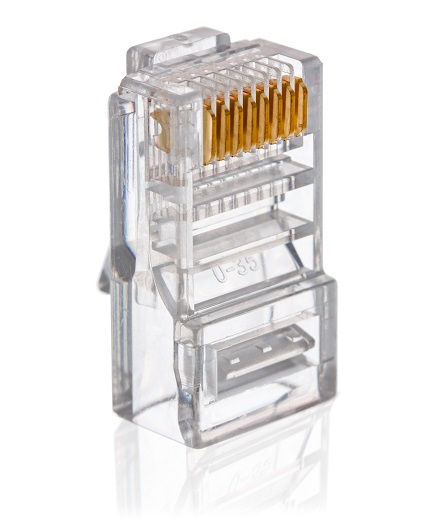 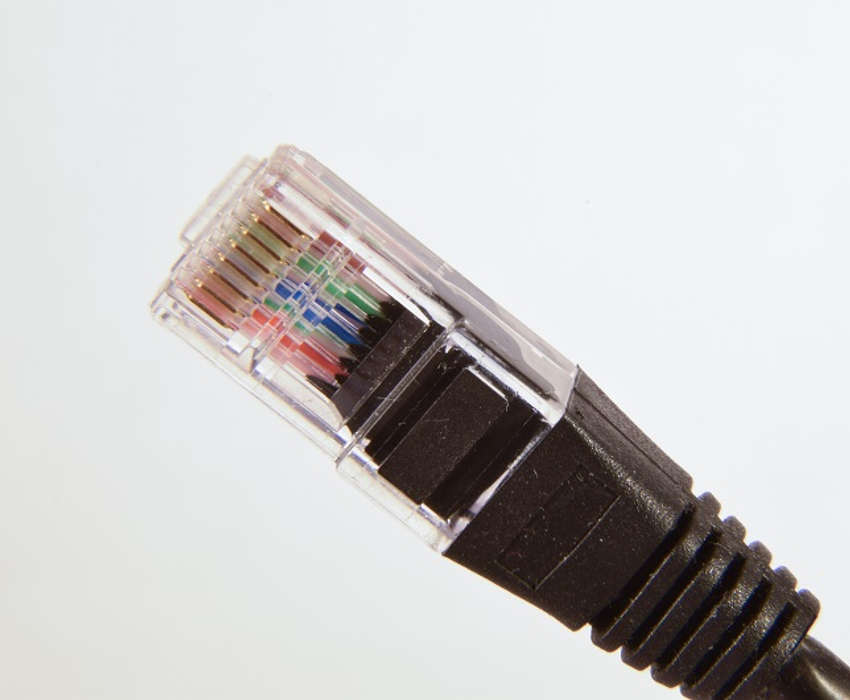 The socket, shown in the figure, is the female component of a network device, wall, cubicle partition outlet, or patch panel. When terminated improperly, each cable is a potential source of physical layer performance degradation.

front and side view of an RJ45 UTP socket, including the color code for wire termination 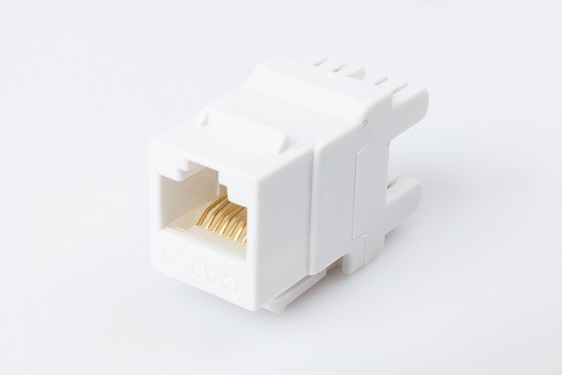 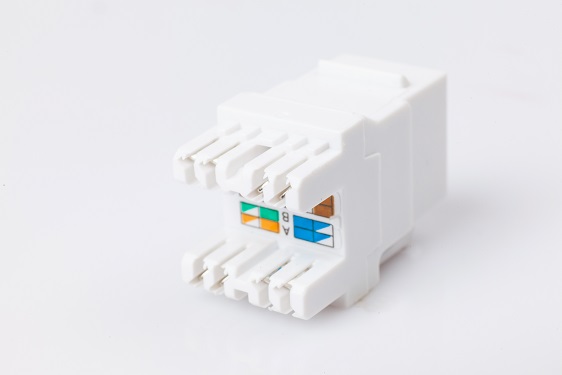 This figure shows an example of a badly terminated UTP cable. This bad connector has wires that are exposed, untwisted, and not entirely covered by the sheath. 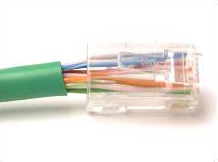 The next figure shows a properly terminated UTP cable. It is a good connector with wires that are untwisted only to the extent necessary to attach the connector. 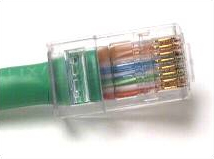 Different situations may require UTP cables to be wired according to different wiring conventions. This means that the individual wires in the cable have to be connected in different orders to different sets of pins in the RJ-45 connectors.

The following are the main cable types that are obtained by using specific wiring conventions:

Note: Another type of cable is a rollover cable, which is Cisco proprietary. It is used to connect a workstation to a router or switch console port.

Using a crossover or straight-through cable incorrectly between devices may not damage the devices, but connectivity and communication between the devices will not take place. This is a common error and checking that the device connections are correct should be the first troubleshooting action if connectivity is not achieved.

The figure identifies the individual wire pairs for the T568A and T568B standards.

The table shows the UTP cable type, related standards, and typical application of these cables.