A WLAN is open to anyone within range of an AP and the appropriate credentials to associate to it. With a wireless NIC and knowledge of cracking techniques, an attacker may not have to physically enter the workplace to gain access to a WLAN.

Attacks can be generated by outsiders, disgruntled employees, and even unintentionally by employees. Wireless networks are specifically susceptible to several threats, including:

Wireless DoS attacks can be the result of:

To minimize the risk of a DoS attack due to improperly configured devices and malicious attacks, harden all devices, keep passwords secure, create backups, and ensure that all configuration changes are incorporated off-hours.

Monitor the WLAN for any accidental interference problems and address them as they appear. Because the 2.4 GHz band is used by other devices types, the 5 GHz should be used in areas prone to interference.

Once connected, the rogue AP can be used by an attacker to capture MAC addresses, capture data packets, gain access to network resources, or launch a man-in-the-middle attack.

A personal network hotspot could also be used as a rogue AP. For example, a user with secure network access enables their authorized Windows host to become a Wi-Fi AP. Doing so circumvents the security measures and other unauthorized devices can now access network resources as a shared device.

To prevent the installation of rogue APs, organizations must configure WLCs with rogue AP policies, as shown in the figure, and use monitoring software to actively monitor the radio spectrum for unauthorized APs. 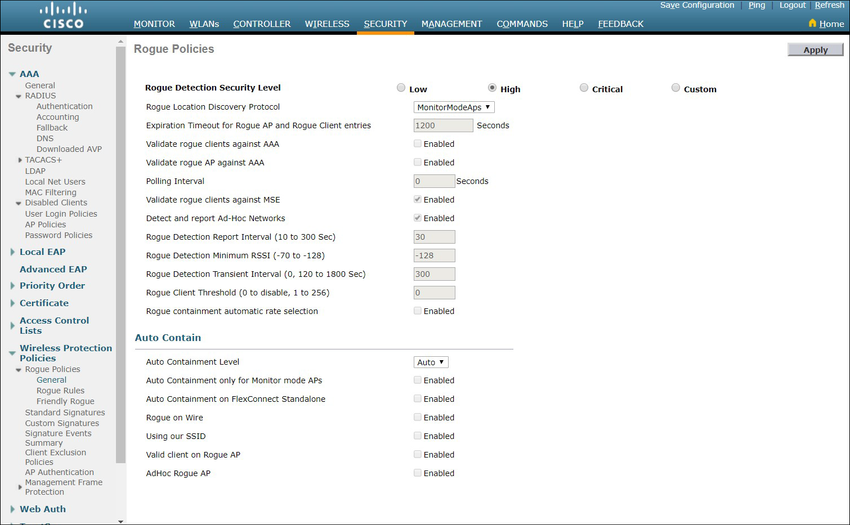 In a man-in-the-middle (MITM) attack, the hacker is positioned in between two legitimate entities in order to read or modify the data that passes between the two parties. There are many ways in which to create a MITM attack.

A popular wireless MITM attack is called the “evil twin AP” attack, where an attacker introduces a rogue AP and configures it with the same SSID as a legitimate AP, as shown in the figure. Locations offering free Wi-Fi, such as airports, cafes, and restaurants, are particularly popular spots for this type of attack due to the open authentication.

a threat actor at Bobs Latte has used their laptop to set up an evil twin using an SSID of Bob latte, open authentication, and channel 6

Wireless clients attempting to connect to a WLAN would see two APs with the same SSID offering wireless access. Those near the rogue AP find the stronger signal and most likely associate with it. User traffic is now sent to the rogue AP, which in turn captures the data and forwards it to the legitimate AP, as shown in the figure. Return traffic from the legitimate AP is sent to the rogue AP, captured, and then forwarded to the unsuspecting user. The attacker can steal the user’s passwords, personal information, gain access to their device, and compromise the system.

Defeating an attack like an MITM attack depends on the sophistication of the WLAN infrastructure and the vigilance in monitoring activity on the network. The process begins with identifying legitimate devices on the WLAN. To do this, users must be authenticated. After all of the legitimate devices are known, the network can be monitored for abnormal devices or traffic.